Getting into this box is what's best for both of us. During your time in the box, you will learn so much, and yet experience so little. It's a wild ride, my friend, one well worth the time spent...and let's face it, you don't have much to do these days anyway.

Slightly off-topic before we begin: I was walking to the bus stop today when I came across an older man, perhaps in his 50's, looked like quite a respectable guy. He was out walking a small black dog, and because I'm making an effort to be more sociable to and about strangers, I gave him a nod and wave and said, "good day."

He immediately stared at me with a gaze of what could only be described as guarded fear. My smile immediately turned from genuine to frozen, and there was this enormous sense of awkwardness as I passed by him and his dog.

It...this just stuck out in my mind. I didn't dare look back to see if he was still staring at me, that's for sure.


Keoni Galt has been a great help to me when I was designing a paleo-ish diet more suited to what's available locally, since our physical situations aren't that different with both Hawaii and Singapore being tropical islands. Sure, the cultures may differ, but some of the emphases are still there - coconuts, for example, seafood, and the lack of land for large animals that give red meat.

With that being said, the main adjustments I've had to make to most western paleo diets include:

Accommodating avoidance of grains and soy. This is highly frustrating, as so much of asian cuisine is based about these two items. While I eat a modicum of polished rice a day, usually at one but at most two meals, soy is a must-avoid due to phytoestrogens. Tofu is everywhere - fried, in soups, in desserts, as snacks, used as wrappers for food, as a drink in soy milk...

And let's not mention south-east asian soy recipes like tempeh. Then there're condiments such as light and dark soy sauces, additives like soy lecthin as emulsifiers...

To say it's annoying is an understatement.

Then we have rice. Rice is so integral to asian culture than the chinese verb "to eat/to have a meal", "吃饭" literally means "to eat rice". I don't know about other people, but I feel uncomfortable when people stare at me like I'm insane for asking for no rice with my meal - I usually ask for less rice instead, unless it's from a vendor whom I'm familiar with (such as the campus canteen). Then it's a nod and smile.

Coconut and curries. Keoni has made a post the importance of fats in paleo here, in which he points out the importance of saturated fats, especially coconut. I'll second this - and point out that coconut is relatively cheap, so long as you don't buy the oil. If you want to put it in your hair or on your skin, I understand, but if you just want to get at the saturated fats, grated coconut or coconut milk is less concentrated (22% oil at thick-grade), but gives plenty of bang for your buck.

Malay cuisine is chock-full of coconut, and it has spread to the other local cuisines as well. One of the main uses of coconut milk is in curry - and still predominantly in use even though the government tried to coerce people into using skimmed milk in their curries. In Singapore, you can mainly tell the difference by the colour of the curry - skim milk curry will be largely yellow, while coconut milk curry will have an orange tint and lots and lots of red globules in it, the saturated fats we all so love. You can taste the difference; coconut curry is so much more flavourful.

It's not quite coconut oil like Keoni Galt recommends, but it'll do and I love a good curry.

Malay confections also use a lot of grated coconut, which may or may not be caramelised: If you're watching your budget, these are possible alternatives to buying coconut oil, which costs a pretty penny here and is hard to find to boot. Good thing that almost anything can go into a good curry - vegetables, meat, fish heads...you name it, it can fit in.

Another important thing is the lack of red meat in the local diet, due to the lack of grazing land available on a tropical island. Now, it's not impossible to get red meat thanks to the wonders of refrigeration and air freight, beef and mutton are quite rare and compartively expensive when it comes to the local cuisine. That leaves us with pork, poultry, and seafood to work with.

I've largely followed Keoni's footsteps in this, going for a heavy seafood (fish, prawns, squid) diet supplemented with chicken. Pork is a little tough for me, but I do enjoy the occasional stir-fry/simmer.

Adapting to local vegetables and methods of obtaining fresh food.

While, like meat, the wonders of modern transportation results in Singaporeans getting access to a number of western fruits and vegetables (and technology allowing them to be cultivated up north in Malaysia), it's nevertheless far cheaper to eat local. This means that intake of leafy greens like those which my maternal grandmother used to grow is highly important - these quick-growing greens can form an important part of any modified paleo diet. 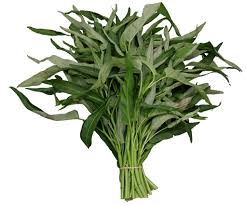 Kang Kong, well known for its hollow stems and ability to grow under flooded conditions. 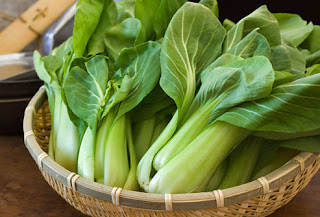 One major complaint about leafy greens is that they have a bitter tang to them, which is more evident in asians than it is in caucasians. This can be remedied by stir-frying them; I can personally attest to the fact that it tends to take off the bitter edge, especially with a bit of oyster sauce. It works on western vegetables like broccoli as well (of which I eat at least half a head per day), but I'm not exactly sure if it'll be to your tastes.

The best way to get vegetables is through one of the local wet markets, which import the stuff in huge amounts over the Causeway from Malaysia every day. It's a direct line from farm to lorry to market in about 5 hours; you can't really get any more direct and fresher than that. Supermarkets may be more sanitised, but if you want the real deal, it's the wet markets for you.

Of course, the ultimate goal is to find a diet that suits your needs and is convenient for you; these are just my experiences. Nevertheless, I hope I've helped another guy like me who's starting out on this path find somthing that's workable.

On a side note, I have begun building a food stockpile in my room and the kitchen. Rice, beans, oats as the basics, with canned mushrooms, vegetables and fish/meat to supplement that - a modest stockpile that can be rotated in and out as I cook every night so nothing stews there for too long a time. I've also got my old army equipment stowed away from Basic Military Training - that good old one-litre green canteen, mess tins, and hopefully I haven't gotten too out of practce at opening a can with a rock or slab of concrete.

The thing is if there is an emergency, Singapore will be not just waterless (as in piped water), but foodless as well. Water might not be so much a problem considering constant rainfall if it gets colder (I have been noticing that the winter monsoon has been dragging on longer than it should have. It usually clears up by the end of January/early Feburary, and it's one month overdue), but food will be, as we have almost no food production capabilities and have to import almost all of it. Best to beat the rush before things get hairy - if I'm going to bug out up north, best to have my rations in good order.
Posted by The Observer at 04:38

Email ThisBlogThis!Share to TwitterShare to FacebookShare to Pinterest
Labels: Self-improvement

People outside the box